The minutes of the meeting held Tuesday 25th June 1974 were read and moved as a true record.

The minutes of the meetings held 3rd September and the meeting held n 29th January 1975 were also read and moved as a correct record.

McEwan expressing his best wishes to Mr Calvert on his retirement as Secretary.

New Members Applications for membership was received from Lord Cochrane of Cults, this was approved

Opener The Marquis of Hartington to be contacted by K N Eyre on possible dates suitable for annual show. Schedules were discussed and Mr B Carr aggred to have 100 duplicated.

Mr WD Tear donated a Silver Cup in Memory of his late father Mr A Tear. This cup to be presented for the Best Bloom in the English Tulip Classes and to be suitably engraved annually

Mr H V Calvert donated a small cup to be awarded to the best labelled seedling in the single bloom classes. If no seedling is entered the cup will not be awarded that year.

Judging Mr J Akers Volunteered to judge the show, a discussion took place on judging and it was decided that Mr J Akers and Mr N H Eyre, judge also two other members to go round and learn the finer points concerning English Tulips. Mr C Harrison and Mr B Carr were nominated for 1975.

Prizes for the raffle were donated as follows:-

It was agreed to distribute raffle tickets next meeting

Mr Guest volunteered to enquire about vases for the show and Mr K N Eyre to write to ‘Garden News’ foe blank Posters.

At the request of Mr C Harrison members stood and observed 2 minutes silence in memory of Mr A Tear of Altofts.

Mr Tear passed away recently aged 76 years of these he gave 41 years service to the Wakefield and North of England Tulip Society.

Over the years he has given thousands of English Tulip bulbs away to try to foster new members to enter in the spirit of showing and keeping the society alive.

At one time he had over 10,000 bulbs of about 16 varieties these have over the last few year been distributed to new members over the UK >in hopes that the English Tulip will survive

Mr Tears name will not be forgotten for it is on most of our trophies and with the new A Tear Memorial Cup his name will live on.

Apologies were given from the following W D Tear, C Marsh

The minutes of the meeting held on the 26th March 1975 were read and confirmed.

Mr Gaunt sent word that we could have the vases from the NCB for the annual show.

‘Garden News’ had sent a order form for posters ??? stating that blank Posters were £2.11 for 50 this was the minimum number they could offer

Opener Has no reply had been received from the Marquis of Hartington, Mr Hunter said he would stand in with the help of his wife.

Helpers Several members agreed to help on Friday night before the show to fill bottles, put up tables etc. 30 dozen bottles were ordered from the Landlord.

Trophies The bases were examined and two of them needed to have a new ring added It was also agreed that while all the cup were together we would have them revalued.

This was left to ALR Hunter and K N Eyre to arrange. Proposed by B Carr and Seconded C Harrison

The Secretary was asked to order 50 Black posters form ‘Garden News’ and distribute to members when available.

Mr Hardman a box of chocolates for a raffle 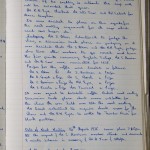 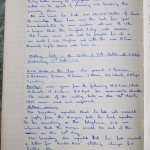 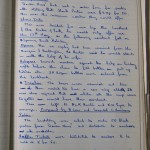 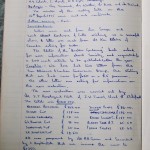