The minutes of the last meeting were read and approved also a brief reading of the AGM Minutes.

Correspondence A letter was read from Rory McEwan stating that he was having an Exhibition at the Redfern Gallery London to be devoted to the Tulip this will take place in October this year. Also he has asked the Sunday Times if they would like to a article on the Society.

Opener – This was held over to the next meeing

Schedules — Mr C Harrison proposed that 18 Tulips in class 1 should be reduced to 12 this would make it easier for members to enter a vase also the cost of buying new bulbs each year were rising. Seconded B Carr This was carried.

Judges – Mr Akers asked if this could been decided next meeting

K N Eyre Mrs Towsend, A Hayward, J Gibson, it was aggreed to distribute the tickets next meeting.

Stock Count The secretary asked if it would be a good thing to find out how many bulbs were held in the society. He proposed to send a Questionnaire to members asking how many bulbs

of each variety they had, some member may be growing variety which were thought to have been lost. Proposed J Akers and second H V Calvert that it would be sent out with the next letter to members 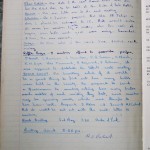 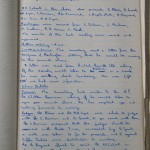