The minutes of the last meeting were read and approved.

Correspondence The secretary read a letter from the Marquis of Hartington stating that he would be coming to the annual show.

A letter was read from Michael Barratt Ltd asking if the society would like to feature in a book he was writing about Gardening. This was left until we had more information

Opener The secretary had written to the MP Mr Walter Harrison asking if he would like to open our annual show. He has replied yes and looking forward to coming.

Raffle Tickets were distributed to members

M A Hayward offered to assist Mr H V Calvert on show day with the writing of prize cards it was agreed that 30dozen bottles would be plenty and 25 Vases from Normanton Paxton Soc along with the vases from the coalboard. 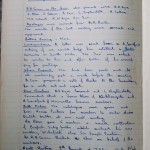