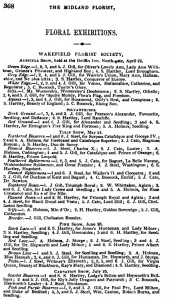 Although we have no record of a Dahlia show (this would have been held in the Autumn) these reports show the range of the Society and also how versatile some members were in the different florists flowers that they grew.

It is not known whether the splitting of Pinks and Carnations was a regular feature though it is likely as the Pink show in 1826 did not include Carnations nor did the one in 1829 where Ranunculus, another of the recognised Florists’ Flowers were also exhibited.