There are a number of exhibitors with the surname Parker in show reports in the early years of the Society from 1838 to 1881, Isaac Parker, J Parker, John Parker and Thomas Parker. Thomas Parker bred tulips which continued to be grown and shown well into the 20th Century and mention is made of a flower named ‘Thomas Parker’ though whether or not it was of his own raising is not known. 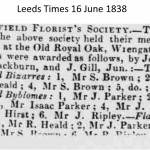