The Minutes of the Committee meeting on 3rd April were Read and signed as a true record.

Mr Eyre questioned why the time of the presentation of the prizes had not also been brought forward in line with the earlier opening time. The secretary explained that this had not been discussed at the time that other times had been amended and she had not dared to take upon herself to change the time which has hallowed by tradition.

It was decided to have the official opening and presentation at 5pm.

Nothing had been heard from the Mayor or the Civvi Functions office. The secretary would investigate. There Has been indications from Mr Victor Roozen that he would open the show if necessary.

Judges for the Annual Show

Mr and Mrs Wainwright had offered to steward

Any other business Mr Akers reported that:

Most of the trophies had been returned and the Cochrane of Cults Vase. The novices cup was missing but would be brought by Beryl Royles from Wales. Any cups not returned before the Annual Show would be engraved afterwards.

The five goblets for 1992bhad been ordered. The one awarded at the Dutch Show to be presented a Main Show A question was raised as to the Peter Emmett cup. No one was sure what it was actually awarded for. The secretary to look into previous records.

A press releaseto be sent to the Wakefield Express as usual With information about the show.

"Inferno" to be sold for the society’s funds.

"Giardins" with a four page article with photographs. A Translation was I hand since it was in Italian.

Timothy clark had published an article in Country Life with illustrations from Rory McEwan’s paintings.

Mr J Hardman asked if a letter could be sent to Mr Frank Smith and his wife thanking him for judging what proved to be a very large show and also for staying and helping.

The secretary thanked everyone who had helped and said it Had been a very successful show. 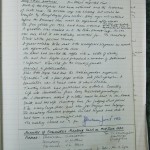