The following new members were approved

The minutes of the last Annual General Meeting were approved

Arising from the minutes Mr Akers announced that he had given a collection of old English florists tulips to the Northern Agricutural Society to be grown at Harlow Car.

A Fellowship card and an intimation that subscription were now due £3.30 per annum were received from the

A letter was read from Mr W D Tear apologizing for not being able to attend owing to the pressure of work, the illness of his father. He also wished to resign from being Auditor& also pointed out that his name had been omitted form the list of Vice Presidents in the new booklet. The

Secretary admitted that this was an oversight on his part & it was agreed that Mr W Tears election to Vice President should be recorded in the minutes book & an appropriate reply sent.

All other correspondence had been attended to by the Secretary & this was approved.

The Annual Report & Financial Statement had been sent to all members & was accepted.

Arising from the Financial Statement was an item of £64.20 for printing the new booklets

The Secretary reported that Rory McEwan had sent a cheque for that amount which the Secretary had returned on October 1st , assuming that there had been a misunderstanding as Mr McEwan had offered to pay up to £25 towards the cost of printing. As there had been no reply the secretary was getting worried & it was agreed that he should write again asking whether or not the cheque had been received & intimate that the committee would be glad to receive a cheque for £25

Auditors report Neither Mr W D Tear nor the Treasurer had been able to attend the audit but Mr N H Eyre reported the books to be in order & financial statement correct.

The Marquis of Hartington London

It was agreed that the offices of Secretary & Treasurer should in future be combined, but that two of the three authorised signatures would be necessary to draw money from the bank. 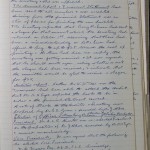 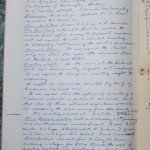