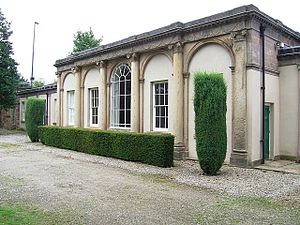 Just one show of the Society is known to have been held in the Public Gardens in Back Lane Wakefield. This was a Tulip Show held on 3 June 1839. Information on the origins of the garden can be found in a link below but include: In 1795, Mary Milnes, the Dowager Viscountess of Galway, inherited a townhouse and garden on Back Lane in Wakefield, from her father, Pemberton Milnes.  Being a keen horticulturalist, Mary had an Orangery built in the garden, probably in the late 1790’s and it is likely that it was used for the cultivation of oranges, lemons and other exotic plants.  Mary died on 15th November, 1835, at the age of 81 and four years later the Orangery and gardens were leased on a commercial basis, to form the Wakefield Zoological Gardens.

It cannot be confirmed for certain that the show was held in the Orangery however it probably was since it is unlikely that there was another building on the site large enough to accommodate a show with visitors.

The link mentioned above is concerned with the unfortunate escape of a bear from a bear pit in the gardens five years later which killed the sister-in-law of the director of the Gardens, Thomas Haselgreave. A further link from a BBC news item gives additional information on the escape.