The minutes of the last meeting were read & confirmed. There were no matters arising.

It was reported that Mr J N Start who joined our Society in April had since died. The secretary was asked to write a letter of condolence to his family.

Correspondence. A letter was received from Dr Fred A Jordan enclosing a cheque for 5 Dollars

Dr Jordan was unfortunately very ill & secretary had sent him a letter thanking him for his donation & expressing our concern for his ill health.

Show Report The secretary submitted a report showing a net profit of £1.69 on the
Annual Show. The early show at Altofts had to be cancelled owing to re- building, but the raffle tickets were sold for a net profit of £8.41. After deducting £2.50 for printing schedules the profit was £5.91. The report was accepted.

A letter was read from our Patron Mr Rory McEwan asking if there was anything he could do to benefit the Society directly for instance financial support for some project.

It was agreed that we needed a new letter head for our stationary & that we would like Rory McEwan to design it for us with a tulip motif (breeder, feathered &flamed)

It was also agreed that we should have re-printed that booklet "The English Tulip & its History" published by Barr & Sons in 1897 with the addition of some up to date information a descriptive list of available varieties & it possible, illustrations of some of the best varieties both black & white & colour.

It was agreed to admit the following new members

The Secretary was asked to send for bulb catalogues & call a meeting when they arrived in July. 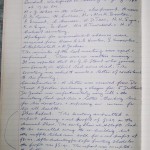 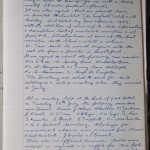