JG Hardman in the chair with 7 members present

The minutes of ten last meeting were read and approved as the show was the main topic at the meeting there were no matters arising.

Correspondence. 2 letters were read for the Field and Harpers and Queen magazine stating that they would be at the show.

Date After a short discussion the date was agreed 31st May. Unfortunately our chairman would be on Holiday

Venue The Secretary inform the meeting that he had the room at Holmfield House previously booked for both weekends so there was no problem on the room.

Opener As the Mayor had been asked to open the show only the date was needed the secretary would inform civic function officer at the Town Hall.

A.O.B. the secretary distributed copies of the Northern Gardener in which he had written an article on the Society they were for sale at 85p each

Apologies were received from the following

The meeting closed at 9.00pm 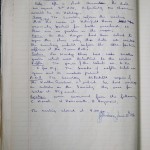